Behind the Scenes at the Neil House

So I'm finally ready to post some shots from my shoot at the Neil House! I wanted to show you guys some behind the scenes stuff first, and later this week I will post my final shots. They are already on my Flickr, so if you want to preview them check them out here.

The Neil House is this gorgeous home that is being restored over at Casey Jones Village. It was originally located in Trenton, TN. Clark Shaw was gracious enough to allow Abby and I to do our little photo shoot inside the house. Mr. Shaw is probably one of the nicest, most genuine people I've ever met. If you're ever in Jackson, you should definitely stop by Casey Jones Village! 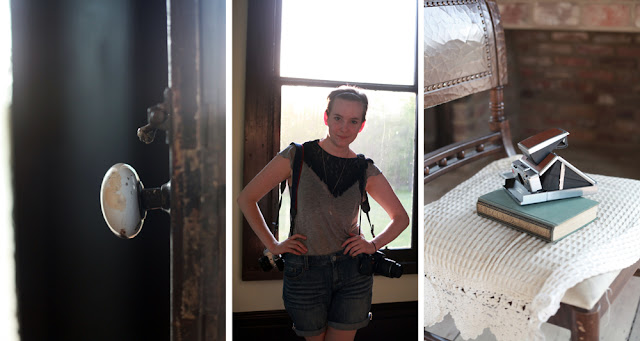 Abby, my fellow shooter. Check out her blog.


My model, Laura Ferkaluk, was amazing. I had to call her SO last minute, and she was such a good sport! We had a really good time and by the time it was over I felt like we'd been friends forever. I thought the color of her hair went really well with the mood I was going for, and she took direction so well! Really, she was just amazing to work with.

Some of my inspiration + a necklace from Tree and Kimball
And last, but not least, here is a video made by the lovely and talented Margaret! She totally blew me away with this one. I LOVE IT!

Behind the Scenes: At the Neil House from margaret brinson on Vimeo.
I really enjoyed doing this shoot with Abby (and company). There ended up being 8 of us working together in this house with no air conditioning. It was SUCH a blast! I kind of went really low maintenance with my shoot. I used mostly my own clothes, some from Goodwill, and a few things from Margaret. Most of the jewelry came from Abby. Laura did her own makeup, and we just left her hair loose and down. I really enjoyed the relaxed working environment! And surprisingly, the images turned out to be better than anything I've ever done.

Abby's shoot was much better planned and organized! She had people doing make-up and styling, along with her boyfriend, TJ, shooting some behind the scenes for her. I have only seen a couple of her shots and I can't wait to see the rest! I know they are going to be incredible. Margaret was awesome and made our video. I love the way she cut without transitions this time. You'd think it would be awkward, but I love the way it turned out. So I think overall, this shoot was a major success! I'm glad Abby and Margaret will be in school one more year, so we can do this again :)

Email ThisBlogThis!Share to TwitterShare to FacebookShare to Pinterest
Labels: behind the scenes, experience, fashion, friends

LOVE the behind-the-scenes shots! Thanks for being so wonderful :) Can't wait for the next collaborative!

wow it looks like it was a major success! i love the lighting in all your pictures! the house looks beautiful and i love some of the sneak peak pictures you posted! i can't wait to see the rest sweetie!!

wow i love looking at behind the scenes shots and your pics were so much fun to go through. would love to see the final results as well!