You guys! Christmas has come and gone...and it was a whirlwind. It was so nice getting to see family and eat delicious food, but it's nice to be settling back down. I'll definitely get a recap up once I have a chance to get pictures off my camera. In the meantime, I wanted to share some pictures from an evening of bowling a while back.

This is at the old bowling alley on Arlington, and as you can see, it's not busy! This place is mainly used for league bowling these days, but I like it much better than the newer bowling alley in town. If I wasn't such a home-body, I'd probably bowl a lot more often! 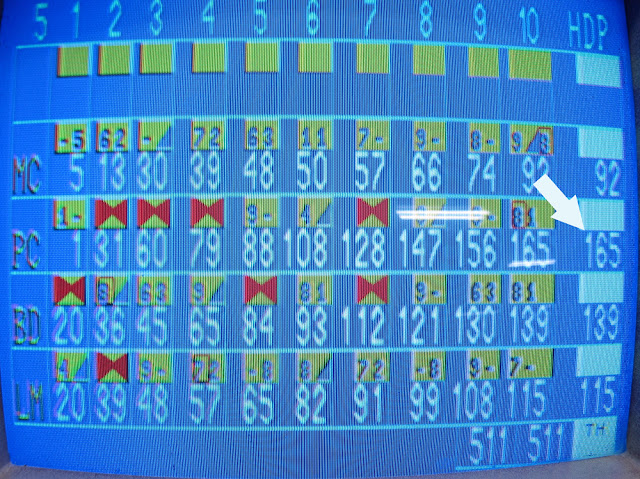 You see that 165?! THAT'S ME! That was after two games of not breaking 100. I will admit, the first strike wasn't me. Mark accidentally bowled under my name and let me keep it. But after that I was on a roll. It'll probably never happen again, so I had to take a picture of it.

I love the weird retro mural on the wall. I can't remember if it was there when I was a kid...but I imagine it probably was. I would recommend this place, but I don't want to be responsible for sending people to that part of town. Also, the men working aren't the most friendly...they aren't mean or anything. I actually like them a lot, but it's an old establishment so they aren't going out of their way to make anybody happy. Haha! I feel bad saying that...but it's true. But if you go when my Nana Emma is working, she'll be a sweetheart, I promise :)

I hope you all had a WONDERFUL Christmas. I will share some of my pictures (and gifts) on here in the next couple of days.
by KristiMcMurry at 8:20 PM

wow 165! that is amazing!! i think i broke 100 before and it was such a fantastic feeling. i love bowling. now that winter is here we will go more often :)
xo,
cb