How can you say no to a granny couch?! 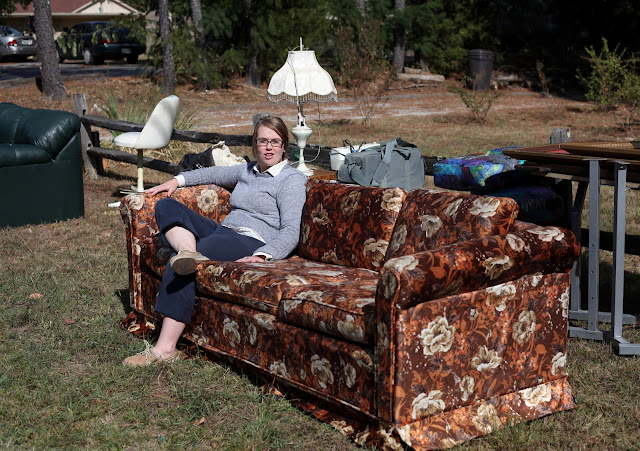 I mean really. It just has some strange appealing quality about it. Paige and I happened upon a home with a lot of things by the street with a sign on the mailbox. The sign bore a single word: Free. We walked around looking at things and finally decided to stuff this moth-ball smelling couch into her blazer. Yes, you read that right. We stuff a full-sized couch into a Chevy Blazer!  Paige also picked up a working sewing machine, and I grabbed a sweet gold frame, which I plan on turning into a chalkboard. 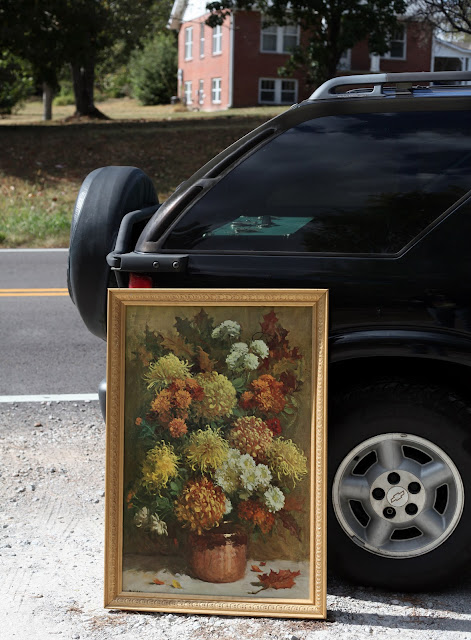 We felt a little weird about just taking it...but the sign said free, so we assumed that was literal. We kept the couch in the garage for a bit, but the mothball smell isn't going anywhere. I put it out in the open air before I left for the conference, so hopefully it will be a little better when I get back. I am going to deodorize it with some Arm and Hammer eventually.

Well, that's all for now. I hope all of you would have done the same thing that Paige and I did...bring that free couch home! At least we saved it from the dumpster, right?
by KristiMcMurry at 8:05 PM

i know i always feel weird taking stuff off the street that says free...feels like someone is going to come running out of their front door and start yelling at you! but hey no one ever does and you got some free awesome stuff! score :D

a blog about the little things said...

I hear ya on the granny couch love! There's something reminiscent of home about them. It's that tacky quality. :D

I always vacuum & then use an upholstery cleaner on all my vintage chairs/couches. Let it air dry & then vacuum the crap out of it again. Then use a deodorizer (I'm now hooked on Febreeze's anti-allergen one even though I hate Febreeze).

I have a chair awaiting just this sort of attention in my shed. Just too plain lazy to actually do the work! Why, oh why, do we have to love vintage so much? ;)
p.s. I bought a can of chalkboard spray paint but as of yet have I created anything with it! further laziness.

How CAN you say no to a granny couch? And we've been looking for one for awhile now. Cute blog. Come and visit mine when you have time.

that is awesome! maybe try shampooing it with one of those machine things?

Hahaha there is really some strange appeal to anything granny-like. Great idea with the gold frame and turning it into a chalkboard! Wish I was more creative.

And to answer your question about the lighting kit I have, it's from Alien Bees and it's the Beginner Bee kit. Super easy to work with and much more affordable than other kits I researched!

That totally reminds me of some of the couches we had during college when the best couch was a FREE couch. My neighbors and I had all kinds of crazy old fashioned patterned couches that got alot of use!

What a grand granny couch it is!